If you dream to visit the United States of America, it is worth to stop in one of the most modern city of the country – Chicago. It is the third biggest city in the USA after Los Angeles and New York. It is located on the edges of the Lake Michigan. It is one of the most beautiful and well-developed city of the USA where lives about 3 million inhabitants. This article will provide some essential information on the city that should be know before you purchase the plane tickets.

The places you should visit during your stay in Chicago

Chicago is definitely the city of skyscrapers. The history of the urbanizations of the city comes from the great fire which destroyed one third part of the city in 1871. On the ruins of the late nineteenth century, a new school of design and technology for the construction of skyscrapers was born. It is also called the Chicago School of Architecture. Today, the holidaymakers may admire the 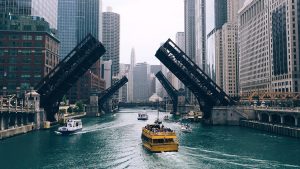 historical buildings constructed by the Frank Lloyd Wright. It is also worth to visit the glass skyscrapers- the Sears Tower that is a 440-meter building. When you see the agglomeration from the 103rd floor, it is the highest time to walk along Chicago streets and discover other interesting spots of the city. It is worth to take a walk on charming and representative street of Chicago called Michigan Avenue. Later, it is worth to visit parks and other green areas that are available in the city. When you are interested in visiting museums, it is a good idea to step in the Museum of Natural History where you can see the largest fossilized tyrannosaur skeleton and an exhibition of history, culture and work of Indians of the Americas as well as Egyptian mummies.

How to get to Chicago?

The easiest way to get to Chicago for the international tourists is the plane journey. The city is served by 2 biggest airports and 10 smaller airports. The main airport of Chicago is O’Hare International Airport located 17miles/27kilometres from Chicago City Centre. It is the second most busiest airport in the world after Hartsfi

eld-Jackson Atlanta International Airport. The airport serves about 78 million passengers every year. It provides over 200 destinations to the passengers. There are offered 153 domestic flights and 55 international. The busiest routes are flights to New York – La Guardia, Los Angeles, San Francisco and London-Heathrow. The second biggest airport in Chicago is Midway Airport that serves mainly domestic flights.