The capital of Germany is situated very close to the Polish border, that is why a lot of people from our country are visiting it. Nothing surprising in that, Berlin is very interesting place with a lot of great attractions. If you are visiting it during the longer weekend you have to choose the best monuments, cause there are too many to explore each.

After the world war two Berlin was totally devastated and separated on two parts. During next decades it was reconstructed and nowadays we can still admire one of the nicest monuments. First of all you have to take a tour to Brandenburg Gate, the main symbol of Berlin. It was founded in the nineteenth century as a symbol of important, war victory. Another good piece of 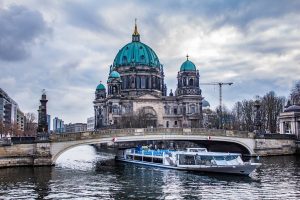 architecture is headquarter of German Parliament. It is beautiful, classical building localized in the central part of Berlin. People who are interested in sacral monuments need to go to the Main Cathedral. It is great, Baroque temple, with astonishing interior design. Also, you shouldn’t miss a trip to the Memorial Church. It was devastated during the last war, and now we can see interesting ruins of this Gothic Revival temple.

In Berlin you can buy one ticket to explore all of galleries situated in the Isle of Museums. First of all go to the Pergamum Gallery, where plenty of architectural monuments can be found, mainly from Ancient period. One of the greatest exponent in there is a The Gate of Ishtar, authentic part of the temple of Babylon. There are also a lot of exponent from Arabic culture. Another great place in the Isle is the Bode Museum. There are many of exponents of German applied arts, like interior design, old clothing and weapons and even coins. If you are looking for the one of the greatest exponents on the world you shouldn’t miss the New Museum. The central exponent of it is an authentic statue of Nefertiti. Also, entire gallery is dedicated to the Egyptian history. If you wish to admire the best German and European artists, you have to go to the Old National Gallery.

But Berlin is not only about conventional monuments. If you wish to see another part of the city go to Kreutzberg. It is part of the city inhabited by artists and people from another countries. It is filled with oriental shops, art galleries, little book and gift shops and restaurants with tasty and healthy food. If you are interested in the Berlin Wall, go to the east part of the city. You can find in there pieces of the wall colored with interesting graffiti. More: https://www.lot.com/airline-tickets/flights-to-germany